Harriet Tubman: Through the Eyes of Children 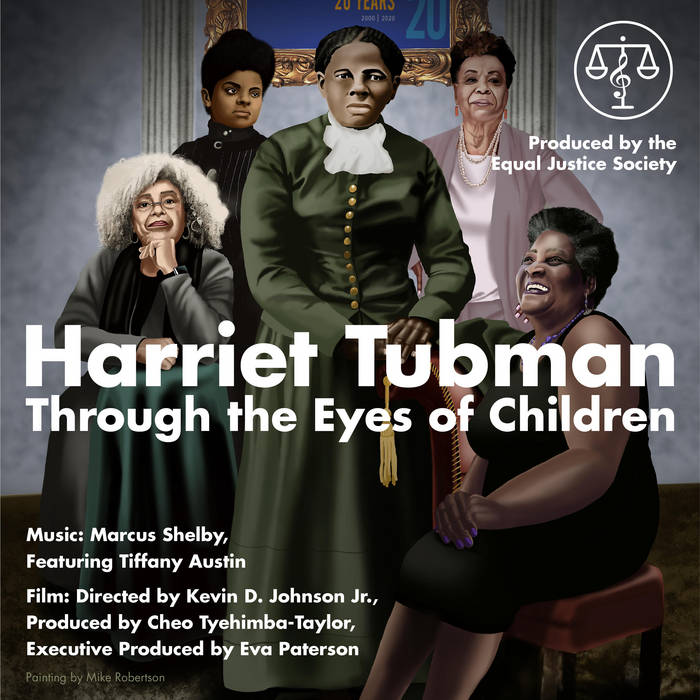 "Harriet Tubman: Through the Eyes of Children" is the musical soundtrack to the film, which is a multi-artistic collaboration between music, film, dance, visual art, and animation to tell the story of how Harriet Tubman inspired young black girls to use their voices to fight for justice and equality during the Breonna Taylor and George Floyd protests summer of 2020 in the middle of the Covid19 pandemic. Music composed and arranged by Marcus Shelby for his quintet featuring Tiffany Austin, film directed by Kevin D. Johnson Jr., produced by Cheo Tyehimba-Taylor, and executive produced by Eva Paterson. "Harriet Tubman: Through the Eyes of Children" also honors the 20th year anniversary of the Equal Justice Society, the powerful civil rights nonprofit led by Eva Paterson. The music was recorded and videotaped live without an audience at the Red Poppy Art House in San Francisco on August 15, 2020. The final selection "Black Suffrage Blues" was recorded by the Marcus Shelby Orchestra and comes from their earlier release titled "Harriet Tubman: Bound for the Promised Land".

executive producer by Eva Paterson and the Equal Justice Society

All music composed and arranged by Marcus Shelby except for "Wade in the Water", "Pharaoh's Host", and "Go Down Moses"

Music recorded, mixed, and mastered by Ryan Beveridge and James Boblak for Everything Audio Visual

Recorded live at the Poppy Art House in San Francisco on August 15, 2020

Marcus Shelby is a composer/bassist who lives in San Francisco, California. His work focuses on the history, present, and future of African American lives. Currently, Shelby is the Artistic Director for Healdsburg Jazz. Shelby composed the score and performed in Anna Deavere Smith’s Off Broadway Play and HBO feature film “Notes from the Field” (2019) ... more

Bandcamp Daily  your guide to the world of Bandcamp